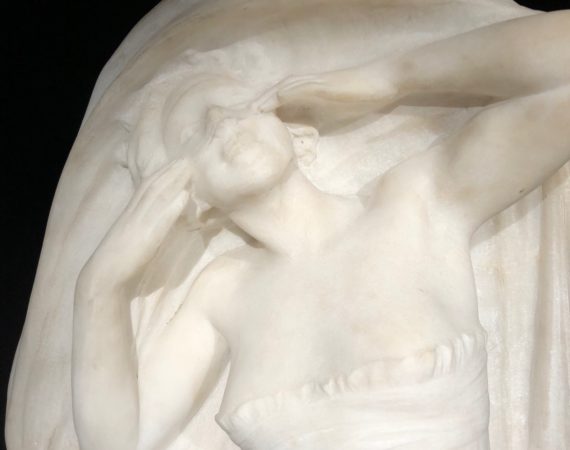 Victor Rousseau
Born on 16th December 1865 in Feluy- Died in Brussels in1954
Son and pupil of Emile Rousseau the stone carver.
From his youngest childhood, Victor Rousseau began to manipulate the chisels in the families entreprise.
He looses his mother at the age of 5 and is educated in the library of his grandfather who was an ebenist .
At the age of 11, he accompanies his father and uncle on the huge construction site of the palace of justice from Poelaert.
His uncle teaches him the basics of drawing and shares with him his passion for classical music and composers.
In 1879, he enrolled at the Academy of Fine Arts of Brussels at the lessons of drawing of ornaments and the year after at the same lessons given by  Georges Houtstont at the academy of Saint-Josse . This teacher was responsible for the crew of marble and stone carvers of the new palace of justice from Poelaert.
Houtstont noticed the talented predispositions of the young boy .
he encouraged him to join his studio where he became a perfect ornamentist.
So, several ornements in this famous building were realized by Victor Rousseau.
Houtstont particularly favors our young artist by granting him the right to follow for three years the courses of anatomy and human dissection with Dr. Sacré of the Free University of Brussels.
In 1887, he began to practice statuary at the Brussels Academy after registering again in 1886 for the ornamental drawing lessons.
Encouraged by Jean Delville to sit for the entrance examination of Charles Van der Stappen’s class, Victor Rousseau ranks first.
He won the Godecharle prize in 1890 with the sculpture “The Torment of Thought ». He got married the same year.
In 1892, he was one of the many founders of the avant-garde movement of the artistic circle “Pour l’Art”.From then on, the wheel of success was put into operation and many official orders returned.
He traveled to Italy, France, England and became a professor at the Academy of Fine Arts in Brussels in 1902.
In 1904, Sander Pierron, art criticist, wrote about him:
“Victor Rousseau’s productions are characterized in two ways: by the harmony of the lines and by the intimate feeling of the faces.
They are full of rhythm and full of peace. There is music in this sculpture.
There are few modern sculptors who have so perfectly grasped feminine grace as Victor Rousseau.
It is the whole psychology of the woman, infinite and diverse, which makes us love and adore in so many delightful and incomparably encamped figurines. “
Bibliografy:
-L’Art à l’époque de l’Art Nouveau.

Ask for information Contact us for any price demand, or any information about an art piece Ask for a quotation You wish to sell a good ?
Get a value estimation from an expert

Other products from this category